Great to see a neighborhood turnout for the ribbon cutting on the @yorkshiredrivebylfl Little Free Library today. Dropped off some books and got a Curious George to read to my little Remi. Love Kate’s Disneyfied decorating ( but there are books for kids and grown up kids too).
#azalea time in #nj Boom!
#allium timeline
“You think your pain and your heartbreak is unprecedented in the history of the world -
“Fog, atmospheric moisture still uncertain in destination, not quite weather and not altogether mood, yet partaking of both.” - Hal Borland
From 2019. This is what can happen when you leave me toys, a big sketch pad and crayons on the table while I’m having my coffee @cedarbeanscoffeejoint

Classics Illustrated is a comic book series featuring adaptations of literary classics such as Moby Dick, Hamlet, and The Iliad.

The series began publication in 1941 and finished its first run in 1971, producing 169 issues. (Other companies reprinted the titles after that.)

I am not the only kid who was first exposed to classic literature through the series. For me, that happened in the early 1960s.

Each issue of 64 pages was not only an abridged but accurate literary adaptation, but featured author profiles and various educational little fillers. There were no ads. No ads.

I always read the back cover catalog of titles to decide what was my next purchase. Luckily, my mom thought they were good for me to read.

I have very vivid memories of spinning the comic book stand at Sam’s Deli at Lenox & Madison Avenues in Irvington, NJ. I can hear the squeak.

Most comics cost 12 cents – Classics cost 15 cents – which made it clear that they were “special.” Oh, I also bought Superman and Archie comics. Sometimes, there were “giant” issues for a quarter.

I loved having a quarter to spend. Two comics and still a penny candy. Maybe a sour apple gumball. No sales tax. Or one comic, a 10 cent fountain soda or Fudgesicle and 3 penny candies. What a deal.

In 1942, the publisher became the Gilberton Company, Inc. with reprints of previous titles. With WWII, paper rationing forced a cut to 56 pages and costs later cut it to 48 pages. 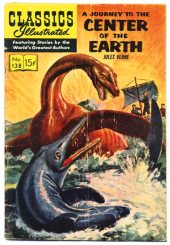 These comics led me to begin reading the actual books.  I tore through the Jules Verne comics and I read the books. I doubt I could get through the novels any more. I reread Moby Dick many times – and I have reread that novel probably a dozen times.

The series actually became Classics Illustrated in 1947 with issue #35,  The Last Days of Pompeii. In 1951,they added painted covers.

By the time I was born, they had added Classics Illustrated Junior, some special issues, and The World Around Us.

What happened?  Television, Cliff’s Notes (for those who had used the comics as such; many a book report was faked using the comics), increased mailing, paper and printing costs.

The comic book series was created by Albert Lewis Kanter who wanted to introduce some great literature to kids who were not reading the original books. It was also a time when the comic book industry was coming under attack for its “negative influence” on youth.

Sterling North, a columnist for the Chicago Daily News led the attack. He wrote that comic books were:

“badly written and badly printed. A strain on young eyes and young nervous systems the effect of these pulp-paper nightmares is that of a violent stimulant [and] unless we want a coming generation even more ferocious than the present one, parents and teachers throughout America must band together to break the comic magazine.”

Kanter’s plan eventually worked. I actually had a teacher who had issues in the classroom for us to read. He also gave me a box of old issues at the end of the school year which I still have. The series ranked as the largest juvenile publication in the world for a time.  Even kids who were avoiding reading the novels (or Shakespeare plays) were still exposed to some literary tales that would have otherwise never known.

I remember reading The War Of  The Worlds (#124) and I remember reading the book which I had ordered in school through the Scholastic Book Club. (Thanks again, Mom, for always letting me order a book.)  Number 124 was a classic Classic. I’ve seen the old and new movie versions of that H.G. Wells classic, but my vision of what a Tripod looks like is still in that comic book. The comic of The Invisible Man had better special effects than any film of the time.

I don’t know if there is an equivalent for today’s kids.

Movie versions of classics? Not many of those are made anymore, but you can rent/download films of  To Kill A Mockingbird, Great Expectations and Romeo & Juliet. I’d rather see them read the comics. 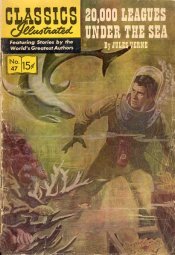