I heard a passing reference on the radio to a place called Fordlandia  (properly written as Fordlândia) and I just had to follow the thread.

Fordlândia is now an abandoned town in the Amazon rainforest.

If you think of Henry Ford as the automotive creator of assembly line technology that you studied in school, you might have missed his attempted social programs. (I won’t write about his attempt to hire ex-convicts from Sing Sing to staff his factories.) He had some successes. He was the richest man in the world in the 1920s. But Fordlândia was one of his failures.

In his time, there was a kind of cartel of Dutch and English rubber barons who controlled the world’s rubber supply. The only sole source of rubber was the South American Hevea brasiliensis tree. (Its sap is natural latex.)

Add some intrigue (Any producers want to work on a film about this? I am available.)  In the 1870s, some entrepreneurial smugglers took some wild rubber tree seeds from the Amazon rain forest and started creating plantations in East Asia that hurt Brazil’s dominance on the global rubber business.

It’s 1929.  Henry Ford needs millions of tires for his cars. He decides to break these monopolies. So, he decided to create his own American-styled rubber plantation in the Amazon rainforest. That was  Fordlândia.

He planned for it to be the largest rubber plantation on Earth.

He had surveys done in the Amazon and came up with Brazil as the most suitable location. The trees were  native there and the rubber could be shipped to U.S. land rather than by sea.

He bought 25,000 square kilometers (2.5 million acres – about twice the size of Delaware) along the Amazon River and started development. They brought in the machinery (even a locomotive) and stripped the forest.

U.S. Ford employees were moved in and the town and homes looked like an American community in the jungle.  Fordlândia had a power plant,  hospital,  library, golf course, hotel,  shops, bakeries, butcher shops, restaurants, and Ford Model T Fords on the paved streets.

This was no secret operation. The Brazilian government had given Ford’s new Companhia Industrial do Brasil a concession for his purchase of land on the Rio Tapajós (near the city of Santarém). Henry Ford gave the government a 9% interest in the profits.

I suppose this plan was a kind of Utopian community, though it was obviously created for money and profit and not for ecological, religious or economic reasons – though those elements all were part of it.

Fordism was already a principle that Henry had created. Pay workers $5 a day and they will be able to buy the products that they make and expand the market. Profit is dependent on high wages.

Henry Ford was an odd mix of personalities. Though he is known as the man who “democratizes” capitalism,  he was also violently anti-unionism in the workplace. His factories were like a totalitarian state.

Perhaps he saw Fordlândia as a chance to try again. He had set up experiments in the U.S. that included small village industries in northern Michigan that tried to balance agriculture and industry and create an organized society according to his rules.

Unfortunately for Ford, most of the Fordlândia workers were indigenous people who did not adapt well to burgers, ID badges, working through the hot midday sun or even the American-style homes.

Ford was also a big proponent of  health food and he gave the workers whole rice and whole wheat bread, canned Michigan peaches and oatmeal. They didn’t go over well.

He even introduced square dancing which he hoped would replace the samba.

Fordlandia had a revolt in 1930 and most of the American managers took off and hid until the Brazilian Army came and ended the rebellion.

Ford wanted to control both factory and home life. He forbade alcohol and tobacco, including inside workers’ homes. The inhabitants set up a sanctuary from Fordism  five miles away on the “Island of Innocence” that had bars, nightclubs and brothels.

Ford actually gave the whole thing another try downstream in Belterra where conditions were better for growing rubber.

But by 1945, synthetic rubber was developed and the demand for natural rubber was disappearing. His investment lost its appeal quickly.

After more than 15 years, Fordlândia never produced any rubber for Ford’s tires.

An NYU professor, Greg Grandin, has written Fordlandia: The Rise and Fall of Henry Ford’s Forgotten Jungle City (which I am still reading).

He points out that despite Ford’s reputation of being a kind of industrial genius, he made a lot of big mistakes. He disliked accountants so much that he never his company audited. When Henry retired from active involvement in the Ford Motor Company, it was said that they had no idea exactly how much it cost to actually build a car.

For his Amazon experiment, he did little research to see if the area was really suitable for growing rubber, and, unbelievably, he  never consulted experts on rubber cultivation.

A documentary film made by Walt Disney about the project (see below) paints a Utopian (or maybe it’s a Disney) version of the experiment. These excerpts are from the film’s narration:

Science and skill work hand-in-hand to produce the finest rubber trees possible. Ford has scoured the far corners of the Amazon, as well as Asia, for selected stock and uses it to build his own super rubber trees. Wild rubber trees produce from three to four pounds of rubber annually. But cultivated trees double and triple this amount, and their yield increases as the trees grow older. In processing the latex, the rubber is reduced to convenient forms, which facilitate handling and save shipping space.

Scientific care, the watchword of the plantation, is extended to the human element, too. Consistent with this policy, the 5,000 inhabitants are provided with every means of making life in the jungle healthy, happy and comfortable. The workers’ houses are clean and airy and offer a pleasant environment with modern conveniences.

Families living on the plantation are highly appreciative of the advantages offered. Their children are given every opportunity to develop into healthy, happy individuals. There are seven modern schools scattered through the plantation with a total enrollment of 1,200 children. Children of the big city may well envy these youngsters, who, in a healthy rural setting, are taught the three Rs, as well as physical culture and hygiene. There’s a day nursery, too, for the younger children whose mothers wish to work. Here, the youngsters are given the very best of care, including scientifically balanced meals.

The company hospital, with the best of modern equipment and excellently staffed, provides free medical aid for the employees.

Recreation is a prime essential in maintaining good health. Lively games serve a double purpose by relieving monotony, too. Later, an outdoor luncheon is served, followed by tempting delicacies. Then comes the afternoon round of golf, played on the plantation links against a beautiful jungle backdrop.

This clip from an interview Greg Grandin did for DemocracyNow includes a portion of the documentary film done by Disney called “The Amazon Awakens” that talks about Fordlândia.  (The clip continues in part 2.) Fordlândia sounds a lot more successful in this Disney version than in real life.

Walt Disney did visit Fordlândia and it may well have influenced some rides later built at Disneyland, such as the jungle cruise. 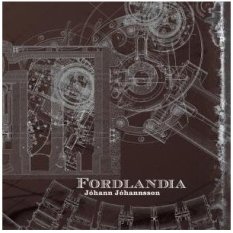 Listen to “Fordlandia” by Kate Campbell from her album Save the Day.

I also discovered that in 2008 an Icelandic composer Jóhann Jóhannsson released an album entitled Fordlândia.

The whole experience seems to me to be a great example of the failed attempts to export American life (or a Ford version of it) to other parts of the world. That seems to be a message that is still quite relevant today.

There’s a movie in this…

More Research Opportunities (for you, or that screenwriter)

2 thoughts on “Fordlandia: Henry Ford’s Failed Utopia in the Amazon”