Follow Weekends in Paradelle on WordPress.com
Join 2,004 other followers

Shallow roots under trees
#roses
Sleep Disorder #004
I still try to keep change in my pocket - which seems to both amaze and confuse young cashiers. #oldschool
Crazy hard rain for 1( minutes, then rainbow, then a sunset in the east instead of west.
She needs some coffee, a Monday muffin, and some quiet time in the Cedar Greens Tiki Garden area. @cedarbeanscoffeejoint 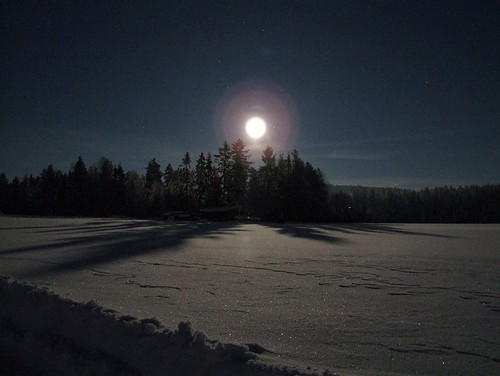 February 3rd is the Full Moon for 2015.  For the Cherokee, it is the Bone Moon or “month when the stars and moon are fixed in the heavens” – even though we know that they are not fixed. On this site, I have called it by some of its other names: the Snow, Storm, Ice Moon, and the Hunger Moon.

It is a tough month of winter for most of the United States. This month’s Full Moon names were most associated with the harsh weather or depleting stores of food. It makes sense for a Hunger Moon, maybe even a Bone Moon, as the food and meat is gone and only the bones remain. When I am hiking in the woods, I sometimes come across the bones of animals that did not make it through the winter. White bones, picked clean by hungry animals, white on the snow and even more so in the light of the Full Moon.

Our Colonial ancestors called this simply the Winter Moon or the Trapper’s Moon, a name that came from eastern Algonquin Indian traditions. Though the tradition is (thankfully) not as common today, this would be the time when it was optimal for trapping beaver, fox, and mink as their fur would be at the fullest.

This is a good time to witness the phenomena of “Moon pillars.” I have never seen Moon pillars which are an optical phenomena that is most likely to occur when the moon is low to the horizon, the air is cold, and ice crystals are angled in a position in the atmosphere where there is direct light in a straight column directly above or below the moon.

A light pillar is created by the reflection of light from ice crystals with near horizontal parallel planar surfaces. The light can come from the Sun (usually at or low to the horizon) in which case the phenomenon is called a sun pillar or solar pillar. It can also appear to come from the Moon or even from terrestrial sources such as streetlights.

There are billions of micro-sized ice crystals in clouds (even in warmer weather) or in minute snow crystals, and as these column-shaped ice crystals drift earthward, they tip and tilt. There are “upper pillars” that are formed when light is reflected downward toward our eyes and “lower pillars” when light is reflected upward from the topmost crystal faces.

I have read that the best time to see them is at sunset when a storm front is approaching (there might be a veil of cirrus clouds in the west). If those crystals happen to be nearly perfectly horizontal, a narrow column is the result. If they are tilted at various angles to the horizontal, then a the pillar of light spreads into what might look more like broad feathers to the Moon’s sides.