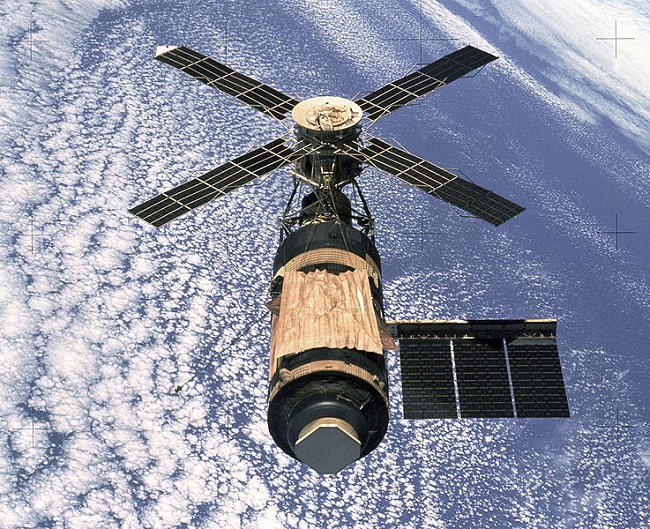 This is a little tale of Man in Space with a funny conclusion. It is a repost from my One Page Schoolhouse blog.

Back in November 1973, NASA launched the fourth and final Skylab mission. This was before the International Space Station and the plan was to see how well humans could live and work in space for extended periods of time.

The actual station was launched on May 14, 1973, and there were four missions. The first was the unmanned launch of the station by a Saturn V rocket. Then different crews were sent up. The first crew spent 28 days aboard Skylab. The next crew did 59 days, and the third and final crew spent 89 days in space.

NASA had originally planned for Skylab to continue orbiting for up to 10 more years while the Space Shuttle was being developed. Unexpectedly, there was high solar activity and that heated the Earth’s atmosphere creating excessive drag on the space station. This caused Skylab to malfunction in 1977.

Two years later, we watched and waited and predicted where and when Skylab would fall back to Earth. Most of it fell in the Shire of Esperance, near Perth in southwestern Australia.

My favorite conclusion to the story of Skylab is that the Shire fined the United States 400 Australian dollars for littering.

Members of the Skylab investigation team visited the Shire to collect the station remnants and were greeted with the ticket for littering. It was meant as a joke and included a mock ceremony in which an officer of the parks service ticketed NASA for littering.

NASA never paid off the $400 gag fine, but in 2009, California radio DJ Scott Barley asked listeners to donate money so they could finally clear NASA’s accounting books. For his efforts, Barley was invited to Esperance and received a key to the city.

NASA learned its lesson and has not littered in the Shire of Esperance since then.