“I’ve been thinking a lot about Edward Hopper. So have other stay-at-homes, I notice online.” I often think about Hopper’s paintings, so that opening line from a article in The New Yorker did not surprise me. I don’t think Edward Hopper has been more on my since this pandemic began but I can see what might appeal to some people about his paintings right now.

The article’s author, Peter Schjeldahl, calls Hopper “the visual bard of American solitude—not loneliness.” The distinction is important in these days of isolation. Aloneness – not loneliness – is a Hopper theme.

His two most famous paintings are Nighthawks, which has been parodied many times with other people at that late-night diner, and his Early Sunday Morning cityscape empty of people street.

The article is illustrated with Hopper’s 1950 painting, Cape Cod Morning.”  I have looked at it many times. I still wonder about what that woman is looking at outside.  She’s intent. When I first saw the painting in person I thought it looked like she might be leaning on a walker. It’s probably a table, but a walker makes her longing to be outside more real to me.

People are often alone in his paintings. Their looks can be interpreted as lonely or as peaceful in their solitude.

Hopper is classified as a Realist but Schjeldahl says he is more properly a Symbolist. His work is part draftsman with lots of straight lines, but the most common comments on his paintings are about the light and shadows.  He said, “Maybe I am not very human – what I wanted to do was to paint sunlight on the side of a house.”

The New Yorker article has lots of references to influences that I don’t know – Courbet, Gericault, Burchfield – but I do get the connections to things like Hitchcock’s Bates’ home in Psycho which was influenced by Hopper’s House by the Railroad.

His landscapes don’t generally have people and, again, you might see that as solitude or loneliness, sadness or peacefulness. 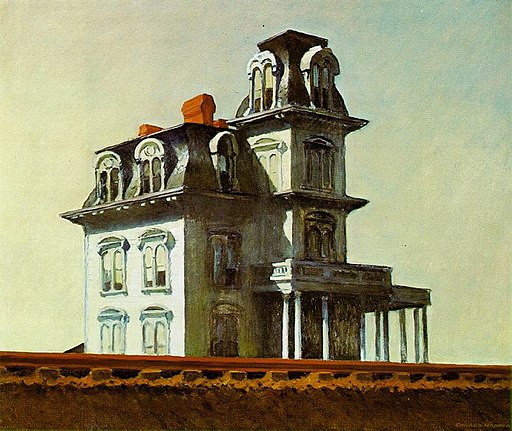 Like Alfred Hitchcock’s working relationship with his wife Alma (screenwriter and film editor), Edwards’ wife, Josephine, a painter herself, also served as his model and cataloged his work.

At 83,  Hopper’s last painting was Two Comedians. It is a farewell picturing he and Jo as two pantomime comedians in the style of the commedia dell’arte taking a final bow to the public art life.  Edward died less than two years later and Jo the following year. In the end, we are all alone but hopefully not lonely.