As the story goes, Ernest Hemingway liked to drink mojitos. I haven’t been to Cuba but I have been to Hemingway’s home in Key West and several bars here feature a Hemingway mojito. But according to Philip Greene, the mojito wasn’t Hemingway’s beverage of choice.

Phil has done the research, including in Cuba, and probably has had his share of mojitos as part of the research.  It seems that Ernest never wrote about mojitos but he did write about daiquiris.  It seems that a daiquiri was his drink of choice at El Floridita in Cuba.

I’ll count the daiquiri as his “formal” drink to order at the bar. But another drink that comes up in Greene’s research is less formal. It goes by the name “Gregorio’s Rx” and is supposed to be what Hemingway’s boat skipper, Gregorio Fuentes, would make on board when Papa was feeling unwell at sea.

Let’s compare the three drinks. (Yes, you can find variations on the recipes but these are the classic versions.)

That seems a bit too soda-bubbly, minty and sweet for Papa. 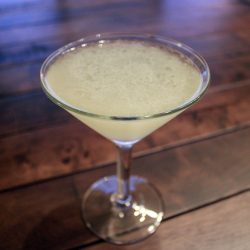 The poor daiquiri has been revised into all kinds of silly frozen and colored monstrosities which you might order poolside but I don’t see Hemingway ordering one in Havana or making one on his boat, the Pilar. I would say he’d want the plain, classic version. It’s simple.

What Greene discovered as Gregorio’s Rx is similar to both but modified.

I don’t know that you actually need Papa’s Pilar Blonde Rum to make this drink. The honey syrup is easier to make than simple syrup, and lime juice (rather than fresh limes) and fewer mint leaves is easier to bring on a boat. Do the shaker thing with all of that, strain and pour, add a mint garnish if you’re feeling fancy.

Then pick up a copy of Islands in the Stream (or even the movie version if you’re feeling lazy) and pour.