I wrote earlier about the Jean Shepherd story that became part of the film, A Christmas Story, Ralphie feels ripped off when he sends away for a decoder ring. The ring is a promotional item for the old radio program Little Orphan Annie that was on the air from 1930-1942. By sending in labels from Ovaltine drink mix, he gets a decoder ring that allows you to decode a secret message at the end of each program.

He checks the mail impatiently every day and when it finally arrives, he tests it out. The “secret message” turns out to be a promotion saying “Drink more Ovaltine.” Scam! Deceit and disillusionment.

I was not immune to such subterfuge as a kid. Annie’s ring was before my time but I did get a decoder ring at a store and so did my friend Kenny. (Yes, one of my closest friends was also a Kenny – it was a popular name at the time.)  Of course, we had no secret messages to decode but we used it in school to pass encoded notes in class. We were actually hoping to get caught, and of course, we did. But no teacher ever decoded our notes. We figured that we had baffled them, though probably they just weren’t interested enough to figure out what two  10-year-old boys were writing.

Our decoder, like Annie’s ring, used one of the simplest and most widely known encryption techniques called the Caesar Cipher.

(The one shown here is from Amazon.) It is a type of substitution cipher in which each letter in the plaintext is replaced by a letter some fixed number of positions down the alphabet. For example, with a left shift of 3, D would be replaced by A, E would become B, and so on. So “blog” would become “eorj.”

The method is named after Julius Caesar, who, according to Suetonius, used it in his private and military correspondence. (I was a Caesarian birth so I felt some kinship with the Emperor and widely avoided any kids named Brutus or Cassius.)

There were lots of cheap, gimmicky toys that I bought as a kid. A good number came through ads in comic books or magazines. What kind of “detective kit” would you expect Dick Tracy to send you for fifteen cents?  Paper goods…

The best deal was “free” as in what you got inside a Cracker-Jacks box or in cereal. It was irrelevant to kids that free meant your parents had to buy the product. They were the fast-food giveaways of the 50s and 60s.

I had several diving frogmen and submarines from cereal boxes. You loaded some baking soda in a compartment and dropped them in the batub and the resulting foaming bubbles sent the toy up and down in the water. Fascinating for a day.

Those original giveaways – and their more modern-day counterparts – are pretty collectible if you look online. 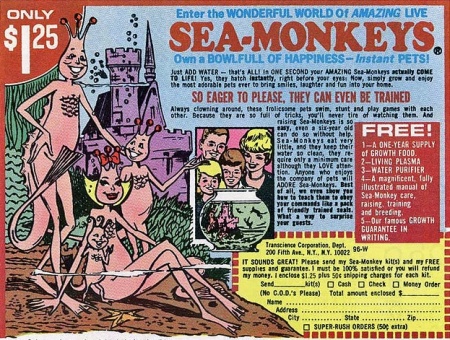 I did send away for “sea monkeys.”  This novelty aquarium pet was no monkey but it was a type of brine shrimp. They were sold from 1957 into the 1970s, mostly via comic book ads. The brine shrimp did “hatch” and did  jump around in a monkeyish way, though you needed a magnifying glass to really see them.

They didn’t live very long but they were a kind of science project for me. I read up on them and learned a big word: cryptobiosis.  Cryptobiosis or anabiosis is a metabolic state of life entered by an organism in response to adverse environmental conditions. Maybe they get dried out (desiccation – like these shrimp) or frozen or lack oxygen. They go into a cryptobiotic state when all measurable metabolic processes stop. Suspended animation. Like space travelers in sci-fi stories or Walt Disney’s head. When environmental conditions return to being hospitable, the organism will return to life. I brought those shrimp back from the dead! Frankenstein or a modern Prometheus!  The power was rather heady.

For me, the biggest disappointment was the X-Ray glasses. Those ads were always in comic books and I read a lot of comic books.  I was not terribly interested in seeing the bones in my hand. I wanted the Superman vision and the girls at school were the object of my new superpower.

They didn’t work. How could they possibly work, cost a dollar and not be a scientific revolution? If you’re thinking that this is all nostalgia and gullible kids from decades past, think again. You can still buy those X-Ray specs/spex.  I found them on Amazon.

The Original X-Ray Vision Spex . These crazy cool specs are the same ones that went wild back in the 50’s! The Original X-Ray Spex allow you to see bones through skin and to see through clothing! Amazing X-Ray vission guaranteed.  [Does their misspelling of vision let them off the hook legally?] Bright lights help to form the illusion just simply hold your hand towards the light spread fingers and see the bones. [How bright would that light have to be ?!] You can use them at night and mystically see the words X-Ray on every distant point of light. [Not that mystical – the words are printing on the lens] Take X-Ray spex to parties, get-togethers, schools, and hospitals. Your teachers, friends, and family will beg you to try these amazing glasses. They always work and they are loads of fun! X-Ray Spex make great gifts for doctors, radiologists, financial advisors, stockbrokers, and airport security personnel. [An interesting group, but yes, as a gag gift they might be fun.]  For over 40 years, these mesmerizing specs have amazed millions of people all over the world.

I’m sure every decade has its X-Ray specs and sea monkeys. What was one of your childhood consumer disappointments? Leave a comment.