In certain beliefs and philosophies, there is a center to the world. It is called by some axis mundi and it is the connection between Heaven and Earth. In astronomy, axis mundi is the Latin term for the axis of the Earth between the celestial poles.

It goes by other names: the cosmic axis, world axis, world pillar, center of the world, and world tree. 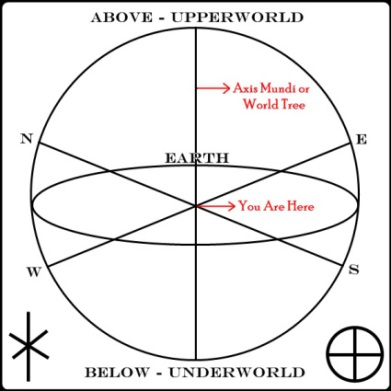 We don’t know the origin of this idea. There are psychological and sociological interpretations. One interpretation is that it is a natural and universal psychological perception. That is the idea that the particular spot that one occupies (You Are Here) stands at “the center of the world.”

The name of China means “Middle Kingdom” and expresses an ancient belief that the country stood at the center of the world. However, within any sacred place is a specific spot that is the actual center of the center, the axis mundi.

Another interpretation is that the center is a natural object, such as a mountain or even a tree. A mountain or other elevated place where earth and sky come closest is often seen as the true center. The peak of a mountain is often regarded as sacred. Mount in China is such a spot. For the ancient Hebrews, it is Mount Zion.  Mount Kailash is holy to Hinduism and several religions in Tibet. Denali in Alaska is sometimes portrayed as sacred. In Australia, it would be Uluru. Mount Fuji in Japan has many legends and powers attached to it. It was considered sacred by the Ainu people, the indigenous inhabitants of ancient Japan,

Another secular interpretation is that it can be a manmade object, such as a pole, a steeple, a mound, obelisk, lighthouse, a monolith. The secular mixes with the religious in ancient Mesopotamia, where the Sumerians and Babylonians erected artificial mountains on their flat plains. The pyramids of the Middle East and Central America carry his meaning. The Sioux beliefs take the Black Hills as the axis mundi.

Some religious interpretations say that proximity closer to heaven is key. This explains the heights of manmade sacred places, like a pagoda, temple mount, minaret, cathedral, or pyramid.

There is a shamanic concept that a healer traversing the axis mundi can bring back knowledge from the other world. You can find this in the stories from Odin and the World Ash Tree, Yggdrasil, an immense mythical tree that connects the nine worlds in Norse cosmology. It is also present in the stories of the Garden of Eden and Jacob’s Ladder. It probably figures into fairy tales such as Jack and the Beanstalk and Rapunzel.

In The Divine Comedy by Dante Alighieri, the hero’s descent and ascent through a series of spiral structures through the Earth’s core takes him from the depths of hell to celestial paradise.

Travelers to the axis mundi are often depicted carrying a staff that represents the axis itself. The Rod of Asclepius (an emblem of the medical profession that comes from Greek mythology) and the caduceus (an emblem of correspondence and commercial professions) features a staff with a serpent(s) who acts as a guardian of, or guide to, knowledge.

There are also those who believe that the center of the world, or even the universe, is within each of us.