It’s the birthday of John Lennon. I was a fan of The Beatles from the first time I heard “Please Please Me” played at a local record shop. That came out as a single in America in February 1963 but wasn’t a hit. Vee-Jay Records (their label here at the time) re-released it almost a year later because “I Want To Hold Your Hand” was a big hit and they were coming to America.

At first, Paul was my favorite. When I saw that John had published a book, I turned my attention to him. When he turned into a grmpy Beatle, I turned to the meditative, introspective George. Through it all, Ringo seemed the most stable.

John’s death hit me hard. I vividly recall staying up into the morning hours watching the news about his shooting and death. I know that I was exhausted mentally and physically when I went into the faculty lounge in the morning. I knew my friend Bob Shannon was equally crushed. Another teacher made a flippant joke and said “Who cares?” about John’s death and I never forgave him for the remark.

John had the best sense of humor and loved puns and wordplay.  He said in interviews that his childhood favorite books were Lewis Carroll’s Alice’s Adventures in Wonderland, Kenneth Grahame’s The Wind in the Willows, and the Just William stories by Richard Crompton. I also love the Alice books. I read Grahame later in life and still have never read any of the Crompton books.

In 1964, I bought John’s little book of line drawings and Carroll-like stories, In His Own Write. It’s not great writing, but it is amusing. The drawings reminded me of James Thurber and Shel Silverstein. The success of the book in sales and the attention critics gave it surprised John, though he should have expected it with Beatlemania in full swing. 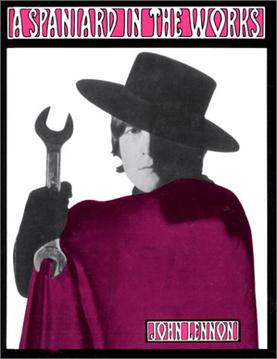 The following year I bought his second book, A Spaniard in the Works. (Both books are sold now in one volume.) It is very much like the first book. The book’s title is a pun on the expression “a spanner in the works.” It means a person or thing that throws of a plan. The American version is to “throw a wrench in the works .” This collection didn’t sell as well. Perhaps, the novelty of a book by a Beatle had worn off.

John read reviews of the books and critics suggested that he must have been influenced by James Joyce, but John said he had not read Joyce. In an interview, he said that he picked up a copy of Finnegans Wake and though he saw the reason they referenced Joyce, he didn’t make it past chapter one. I identified with that. Even as an English major, I  never finished any of Joyce except his short stories.

The connection to Lewis Carroll is more obvious. The counterculture of the 1960s latched onto that absurd, psychedelic aspect of Carroll’s writing. I mean, you have a hookah-smoking character and Alice takes a drug that makes her larger and smaller. Songs like the Jefferson Airplane’s “White Rabbit” are illustrations of that fairly superficial reading of the Alice stories. I have written elsewhere about John’s connections to poetry and literature and Lewis Carroll in particular. I noticed that the edition of his two books noted above says on the cover “The Writing Beatle.” I wonder what John might have been writing today, besides songs.

There is a scene in the movie Yesterday (directed by Danny Boyle) where the protagonist, who finds himself in a world where The Beatles never existed, meets John. At 78, John lives alone in a little coastal home. He had had a good life but it had nothing to do with music. I don’t know that we would know the name John Lennon if his life had gone another way. Of course, we don’t even know if he would have made it to age 81 this year. But I believe if he was here with us now, he would be writing and making art more than making music.

Still, his “words are flowing out like endless rain into a paper cup” and my own “thoughts meander like a restless wind inside a letterbox” as I think about John and all the hours of pleasure and introspection that he and Paul, George, and Ringo brought to me and continue to bring to me.

2 thoughts on “John Lennon In His Own Writing”