From the 1865 edition of The Book of Days: A Miscellany of Popular Antiquities, here are some Moon superstitions that were once popular beliefs.

You’ve heard of the Supermoon, right? That is when the Full Moon is at its closest point (perigee) to Earth. It looks a bit larger to the naked eye. It’s not an astronomical term but more of a popularized term.

So, it is no surprise that the opposite – a micromoon – began to be used when a Full Moon or a New Moon coincides with apogee – the point in the Moon’s orbit farthest away from Earth.

The Moon orbits Earth in an elliptical path, which means one side of the path is closer to the Earth than the other.

The January 2023 Full Moon is typically called the Wolf Moon. It will be full at 6:08 PM EST or 11:08 PM UTC. It is considered to be the first Full Moon of the Winter 2022-2023 season as the December 2022 Full Moon occurred prior to the Winter Solstice. This is the Full Moon in Cancer.

How different will the Moon look tonight? It is further away and looks approximately 14% smaller than a Supermoon – though that is easy to discern to the naked eye. The illuminated area appears 30% smaller, so it might look a little less bright.

Old folklore accounts suggest that Full, New, Super, and Micro Moons all affect human mental health and bring on natural disasters, like earthquakes, but no scientific evidence supports any such correlation. Still, be on the lookout tonight…

We are into the Waning Crescent phase of the Moon which occurs between the last quarter and new Moon phases. In the Northern Hemisphere, we see the Moon’s left side lit and the right side in darkness. The lit area slowly shrinks each day, covering less and less of the Moon’s surface until it looks like a very thin crescent on the left side.

About 30% is lit this weekend with what we call “moonlight.” But there is no moonlight – only sunlight reflected off the Moon’s surface.

The whole Moon will be in darkness at the new Moon phase and another lunar cycle will begin.

Waning Crescent Moons rise in the east between midnight and sunrise and are highest in the morning. It sets (yes, just like the Sun) rather invisibly between noon and sunset.

Even this phase of the Moon has its lore, though the Full and New Moons tend to get more attention. One of the many lunar superstitions is that the first time you see a crescent moon for the month, take all your spare coins out of your pocket, and put them in a different pocket in order to ensure good luck for the next month. Clearly, this belief came from a time when people carried coins in their pockets instead of credit cards and a phone.

Some other Crescent Moon connections:

Tomorrow night, April 30, 2022, there will be a Black Moon. It won’t look different, in fact, it won’t look like anything at all since a Black Moon is a name for a second New Moon in a single calendar month.

Full and New Moons can occur at different times because of time zone differences. It can even be in a different month.

Black Moons may hold special significance to people who practice certain forms of Pagan religions and who believe certain actions become more potent when performed on the night of a Black Moon.

There was no New Moon in February this year which only happens about once every 19 years. There will be no Blue Moon in New York in 2022. That is a third Full Moon in a season with four Full Moons.

During this time, you can see the effect of “Earthshine.” It’s a matter of perspective. The Moon is always half-illuminated by sunlight just like Earth. A crescent Moon seen in the west after sunset or in the east before dawn is a sliver of the Moon’s lighted half.

When we see a crescent moon, that means that a nearly “Full Earth” appears in the Moon’s night sky. The full Earth illuminates the lunar landscape and that ic “Earthshine” – light from the nearly full Earth shining on the Moon.

There was no New Moon in February. This happens (or is it that it doesn’t happen?) about once every 19 years. It only happens in February, as this is the only month that is shorter than a lunar month. When that happens, January and March have two New Moons, instead of just one. The New Moons on January 31 and March 31 are both considered Black Moons.

That term is used in several ways. It commonly is used to refer to a second New Moon in the same month. Those occur about once every 29 months. Time zones mess around with Moon phases. This year, Los Angeles has a Black Moon in March, while New York has a Black Moon in April.

The Black Moon is not the same as the Dark Moon. That is the last visible crescent of a waning Moon and in the Chinese calendar, it marks the beginning of the month.

The original meaning of the term New Moon is the first visible crescent of the Moon after conjunction with the Sun. (shown above) This is a thin waxing crescent and it is briefly and faintly visible as the Moon gets lower in the western sky after sunset.

The first crescent marks the beginning of the month in the Islamic calendar and some lunisolar calendars, such as the Hebrew calendar.

There is a longtime belief in many cultures that rituals performed at the time of the Full Moon and New Moon were more powerful. Neopagan and witchcraft systems such as Wicca follow this belief. Farmers once believed  (and might still believe) that planting during certain Moon phases will increase harvests. 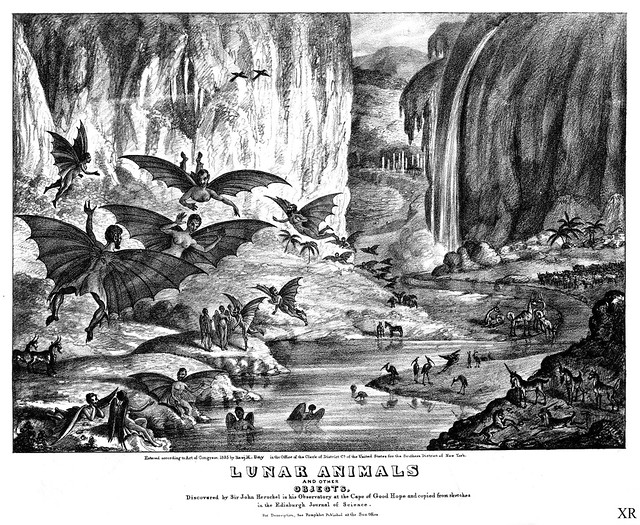 Yesterday, I wrote about how our Moon is wobbling and it is affecting coastal flooding. It might have sounded like a hoax, but it is true. However, there was a big Moon hoax that started on August 25, 1835. The Sun newspaper in New York City printed a series of articles describing scientific findings about the Moon. They said the information came from the Edinburgh Journal of Science. The information was recounted by Dr. Andrew Grant, a colleague of the famous astronomer Sir John Herschel.

The articles described the flora and fauna of the moon, the beings that lived there and the temples where they lived. Those lunar folks were said to “average four feet in height, were covered, except on the face, with short and glossy copper-colored hair, and had wings composed of a thin membrane, without hair, lying snugly on their backs.”  All of this information was seen by an observatory at the Cape of Good Hope.

Of course, it was all a lie. No Dr. Grant, no observatory, no beings. But people believed this. Surprising? Well, people believed Orson Welles’ War of the Worlds radio broadcast about a hundred years later and thought aliens had landed in New Jersey. You don’t expect to read satire or find hoaxes in a newspaper or hear them on radio. People today sometimes see a tweet or link to a story from the satiric The Onion and react or pass it on as true.

Copies of the The Sun sold out and the series was getting reprinted all over the country and the world. The man behind all this was Richard Adams Locke, an editor at The Sun.  He claimed for a while that he hadn’t intended for anyone to believe the tales and that when he wanted to go public with the hoax  but the owner of the paper wouldn’t do it and it was many years before this ridiculous fake news was fully debunked. I suspect people had sopped believing it long before that, but who knows for sure.Edgar Allen Poe claimed the idea was plagiarized from a satire he’d written just a few weeks earlier about a man who made his way to the moon by hot air balloon.