“I don’t really work here.” “That’s what makes it so hard”. #TheBizarroJerry #Seinfeld
Today’s Coen brothers film at the Film Institute @montclairstateu is FARGO at 2pm hosted by Stephen Whitty https://www.montclair.edu/the-film-institute-at-montclair-state/
There’s something about a fireplace hearth that dogs love. Even if it’s fake. I mean the fireplace. The dog is real.
The visiting Ruby was absolutely no help cleaning up leaves.
Water, streetlights and a line of ducks headed to shore. And silence.
Too early little crocus! But I admire your optimism and hope you are prescient.

No, I didn’t mess up on my blog queue. Today is the last day of 2019 – if you follow the Julian calendar. That is the one that was introduced to the world by Julius Caesar in 46 B.C.

Tomorrow (my January 14) will be the Julian New Year which is also known as the Old New Year or the Orthodox New Year. Caesar’s calendar ruled for 16 centuries. The Christian Eastern Orthodox Church still follows the Julian calendar now, though most of the world has gone Gregorian.

All this calendar play is why six and a half million Britons went to bed on September 2, 1752, and woke 12 days later on September 14.

The Martians haven’t landed in New Jersey again, but there were almost 200 reported sightings in New Jersey of strange objects in 2019, according to the National UFO Reporting Center (NUFORC).

One of those reports was right near Paradelle, although I didn’t witness it. The report was on June 1 at 9:30 p.m., and what was reported were 2 circle-shaped crafts, fully lit, flying erratically followed by sustained stillness.

“On June 1, 2019, at 22:30, son and I driving on Grove Avenue, and noticed 2 lit objects we assumed were drones, but based on erratic movement then sudden sustained stillness – we then revised our take as maybe [a] military helicopter. We tried to pull over but cars behind us only allowed us to slow down. They were clear, bright white light – perhaps oval or round, and seemed to be low-flying followed by a definite full stop. By [the] time we turned around – they were gone. I’ve seen thousands of aircraft and son has seen tons of recreational drones. There was nothing familiar about this experience.”

These sightings are compiled by NUFORC which is an independent organization that’s been around since 1974. They assist police departments when people report their observations to 911. Are they true sightings? I doubt it, but they have more than 90,000 sightings from around the world listed, so can they all be false?

I believe in intelligent life outside our galaxy. I believe it is possible that Earth has been visited. I believe that almost all UFO sightings are false. I believe I saw a UFO.

My sighting was in the New Jersey Pinelands (AKA Pine Barrens). I was camping with my family there in the summer of 1991. I was the only one up at about 3 am and I saw a craft over Atsion Lake. It was an elongated saucer shape with small lights encircling it. A bright red light/glow came from the bottom as it hovered close to the dark water. It was there for about a minute, then it rose slowly vertically about as high as four stories on a building and then shot off at an angle and disappeared. I don’t recall any sound coming from it at all.

I never reported it because I didn’t know of anyone who would take my report, and I suppose I thought people would think I was crazy. I told my family and friends. Later, I did check newspapers for reports and found nothing.

Years later when the Internet arrived, I searched sites like NUFORC and the Mutual UFO Network (MUFON) for report from that summer. Nothing.

MUFON is a US-based non-profit organization composed of civilian volunteers who study alleged UFO sightings. It is one of the oldest and largest organizations of its kind, claiming more than 4,000 members worldwide with chapters and representatives in more than 43 countries and all 50 states.

Both these organizations get criticized as pseudoscience, but that’s been true of all UFO efforts since after WWII in the U.S.

This video made the rounds this year showing the screens from some US Navy planes as the pilots report UFOs which the Navy labels as “unidentified aerial phenomena.” 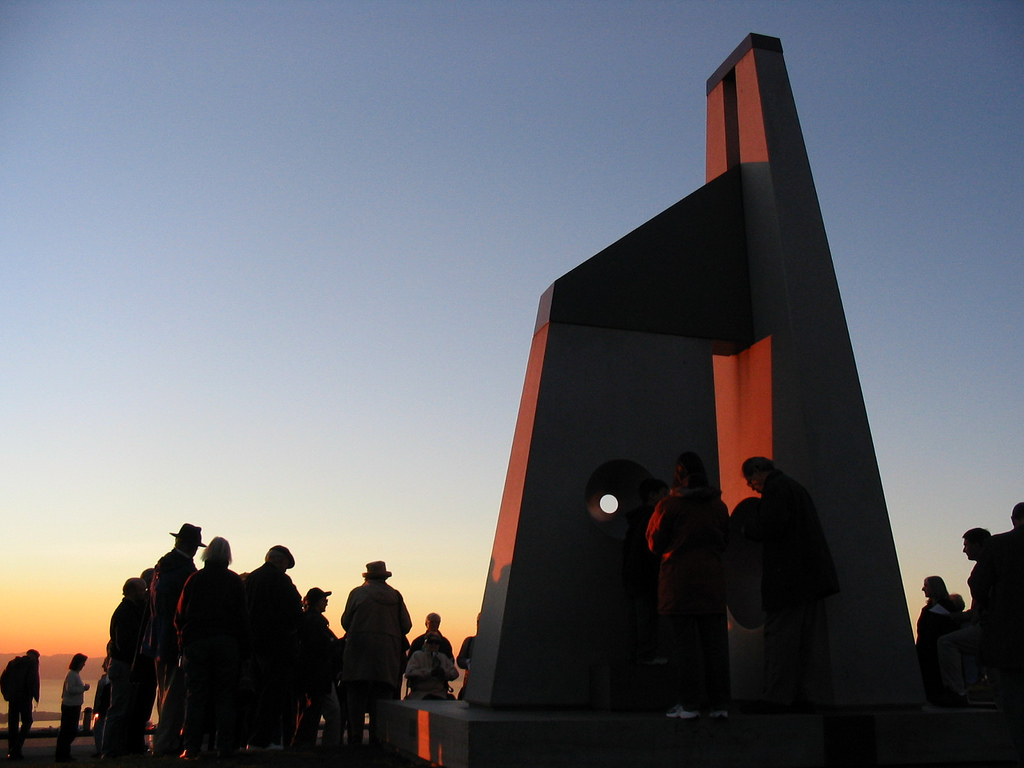 The winter solstice is also known as the hiemal solstice or hibernal solstice,  Midwinter, Yule, the Longest Night and Jólo.

We get a solstice when one of the Earth’s poles has its maximum tilt away from the Sun. That happens twice yearly. For me, this is the shortest period of daylight and longest night of the year, but if I was at the North Pole, there is continuous darkness or twilight around the winter solstice. (It’s the opposite for the summer solstice.)

Why would anyone think of the solstice as “Midwinter” when it seems to be the start of winter? If you want to optimistic, after the winter solstice the days get longer and the nights shorter. But I have to admit that in Paradelle I think of mid-January as midwinter.

The December solstice is usually the 21st or 22nd of December. As with Full Moons, a solstice really lasts only a moment, but we popularly refer to the entire day as the Winter Solstice.

In prehistory, the solstices were observed carefully and were much more significant cultural events. There were festivals and rituals and superstitions and beliefs around this occurrence. It was seen by some as the symbolic death and rebirth of the Sun.

The pagan Scandinavian and Germanic people of northern Europe celebrated a twelve-day “midwinter” holiday called Yule ( Jul, Julblot, jólablót, midvinterblot, julofferfest). This holiday gave us many of the modern Christmas traditions, such as the Christmas tree, the Christmas wreath, the Yule log.  Scandinavians still call Christmas “Jul” and in English “Yule” is often connected to the “yuletide” season which has been in usage since 900.

In “Stopping by Woods on a Snowy Evening” by Robert Frost, the setting of the poem is a woods on the Winter Solstice.

My little horse must think it queer
To stop without a farmhouse near
Between the woods and frozen lake
The darkest evening of the year.

This is a little tale of Man in Space with a funny conclusion. It is a repost from my One Page Schoolhouse blog.

Back in November 1973, NASA launched the fourth and final Skylab mission. This was before the International Space Station and the plan was to see how well humans could live and work in space for extended periods of time.

The actual station was launched on May 14, 1973, and there were four missions. The first was the unmanned launch of the station by a Saturn V rocket. Then different crews were sent up. The first crew spent 28 days aboard Skylab. The next crew did 59 days, and the third and final crew spent 89 days in space.

NASA had originally planned for Skylab to continue orbiting for up to 10 more years while the Space Shuttle was being developed. Unexpectedly, there was high solar activity and that heated the Earth’s atmosphere creating excessive drag on the space station. This caused Skylab to malfunction in 1977.

Two years later, we watched and waited and predicted where and when Skylab would fall back to Earth. Most of it fell in the Shire of Esperance, near Perth in southwestern Australia.

My favorite conclusion to the story of Skylab is that the Shire fined the United States 400 Australian dollars for littering.

Members of the Skylab investigation team visited the Shire to collect the station remnants and were greeted with the ticket for littering. It was meant as a joke and included a mock ceremony in which an officer of the parks service ticketed NASA for littering.

NASA never paid off the $400 gag fine, but in 2009, California radio DJ Scott Barley asked listeners to donate money so they could finally clear NASA’s accounting books. For his efforts, Barley was invited to Esperance and received a key to the city.

NASA learned its lesson and has not littered in the Shire of Esperance since then.

Tonight and on the weekend, look at the waning gibbous Moon and you should be able to see two bright stars nearby. They are bright (unfortunately, so is the Moon now) and they appear so close together that we know them as The Twins.

They are Castor and Pollux in the constellation Gemini.

You should be able to see them (at least in mid-northern latitudes) over the eastern horizon around 9 p.m. and later from the Southern Hemisphere.

If you’re up before dawn,  the Moon and Gemini stars will be in the morning sky to the west.

The Bulletin of Atomic Scientists was created by scientists who saw an immediate need for a public reckoning in the aftermath of the atomic bombings of Hiroshima and Nagasaki.  These scientists anticipated that the atom bomb would be “only the first of many dangerous presents from the Pandora’s Box of modern science.” They now see multiple threats: climate change, cyber-attacks, and the misuse of genetic engineering and artificial intelligence.

They also created the Doomsday Clock as a symbol of these threats which I check out every once and awhile.

So what is the current status of the Doomsday Clock?  “A new abnormal: It is still 2 minutes to midnight.”

“Humanity now faces two simultaneous existential threats, either of which would be cause for extreme concern and immediate attention. These major threats—nuclear weapons and climate change—were exacerbated this past year by the increased use of information warfare to undermine democracy around the world, amplifying risk from these and other threats and putting the future of civilization in extraordinary danger.”