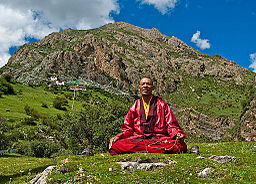 I was able to get away with my family last week despite the madness of COVID and Omicron. I tried to stay off my phone other than to take photos of my little granddaughter.

Back home this week, I was cleaning out some files and came across an article I had clipped out of an issue of Wired magazine years ago about a study that showed that some Tibetan Buddhist practices have been “proven valid” now that the world of science finally had some technology that could “test” them. I’m sure Tibetans were thrilled.

In one experiment, subjects were asked to watch a video of two teams passing a ball. One team wore white shirts, the other team wore black, and the subjects were asked simply to focus on how many times players in white shirts passed the ball to each other. The little trick of the experiment was that there was also a man in a gorilla suit who walked on screen, waved at the audience, and walked off again. The subjects didn’t notice him.

I remember seeing a video of this at an education conference in 2000 (see video below). Buddhism was never mentioned. What’s the connection? The point of the experiment was to show that humans see what they are looking for, not what’s there. That is selective attention. It is also a very old Buddhist teaching.

In the article, they talk with some participants at a Science and the Mind conference in Australia where participants explored areas of connected interest between Tibetan Buddhism and modern science.

For example, a scientist using magnetic pulses tried to access the creativity of the non-conscious mind and altered states of consciousness. Tibetan meditation seems to do the same thing.

I love science but this is something scientists have been trying to do for a long time – prove, disprove or replicate ancient practices.

I wrote earlier about a technique for pain control called Thong Len that scientists can’t prove but that they admit seems to work. What science is unable to prove gets little attention.

Drug-based treatments for depression have not developed as far as we might hope and some scientists think Tibetans may provide a path to the solution.

“If you go to Dharamsala (in India, home of the Tibetan government in exile), you go up through the fog in midwinter and you come out in the bright sunshine, it’s like going to heaven. What strikes you immediately is the happy, smiling faces of the Tibetans, who don’t have much, have been terribly deprived, and yet they are happy. Well, why are they happy? “They work at it! They don’t take their Prozac in the left hand and pop the pill. Monks have been studied by Richard Davidson, they are very positive, they’ve got no material possessions, it’s a grind, it’s cold, they don’t have much food. But they are happy. They work at it.”

The Dalai Lama embraces science and has said that Buddhists can abandon scripture that has been reliably disproved by science. The Dalai Lama has even opened a school of science at his monastery in India saying that “…the Buddhist tradition [is] to try to see reality. Science has a different method of investigation. One relies on mathematics; Buddhists work mainly through meditation. So different approaches and different methods, but both science and Buddhism are trying to see reality.”

Tibetans will mark their New Year (called Losar) on Sunday, February 14th, this year. In the Tibetan lunar calendar, this day marks the beginning of the Iron Tiger Year 2137, a time for change, hope, and renewal.

Last year, Tibetans around the world united and did not celebrate the day as a protest against the escalation in Tibet of the imprisonment, torture and death of Tibetans under Chinese rule.

Losar is celebrated for 15 days (with the main celebrations occurring on the first three days) by Yolmo, Sherpa and in Bhutan, although different regions in the country have their own respective new years.

This year, many Tibetans are planning to observe Losar as a show of solidarity and will speak Tibetan language, wear Tibetan dress, and observe Tibetan customs.

The celebration of Losar predates Buddhism in Tibet and can be traced back to the pre-Buddhist Bön period. In this early Bön tradition, every winter a spiritual ceremony was held, in which people offered large quantities of incense to appease the local spirits, deities and protectors.

This festival took place during the flowering of the apricot trees of the Lhokha Yarla Shampo region in autumn, and it may have been the first celebration of what has become the traditional farmers’ festival.  Later when the rudiments of astrology, based on the five elements, were introduced in Tibet, this farmer’s festival became what we now call the Losar or New Year’s festival.

The Tibetan calendar is made up of twelve lunar months and Losar begins on the first day of the first month. In the monasteries, the celebrations for the Losar begin on the twenty-ninth day of the twelfth month. That is the day before the Tibetan New Year’s Eve.

On that Eve, monasteries do a protector ritual make a special noodle called guthuk. Dough balls are given out with various ingredients hidden in them such as chilies, salt, wool, rice and coal. What you find in your dough ball is supposed to be a lighthearted comment on your character. While chilies means a talkative and white-colored ingredients (salt or rice) are good signs, finding coal is similar to the Western idea of finding coal in your Christmas stocking – you have been bad and so have found a “black heart.”

Tibetans and supporters around the world can light butter lamps and candles on their altars and in their windows on February 14th to honor the courage of the Tibetan people in Tibet who continue to resist the Chinese government’s occupation of their homeland.

Make your voice heard! China has a historic opportunity to show the world that it is a worthy host of the 2008 Olympics. The games are about to begin, so Tibet needs your help, enthusiasm and support to wake China up to this opportunity!

Save Tibet: To learn Six Ways to make the Beijing Olympics a catalyst for change in Tibet, click here.

Help China Wake Up!: Sign the petitions calling on world leaders not to attend the Olympic opening ceremony and demanding the IOC cancel permission for the Olympic torch relay through Tibet!

Tell-A-Friend: To get your friends and family involved in this campaign for Tibetan rights, click here.

Spread the Word: To read ideas on how you can help raise awareness about Tibet, click here.