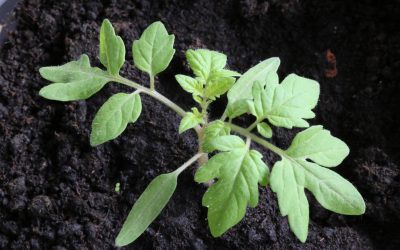 I’m tending my young tomato plants today in preparation for them going into the ground. It is still cool in Paradelle – frost-free but still some 40 and 50 degrees nights and days. I’m a jersey boy and I grew up growing tomatoes in that Garden State in every year I can remember.

My father showed me how to plant seeds in flats the month before the last predicted frost. I didn’t like plucking out tiny seedlings in order to keep the best ones. I wanted every seedling to produce tomatoes, but that isn’t the way it works in a backyard garden.

I learned to dig big holes, add composted manure, plant the seedling deep. I didn’t like putting them in so deep that they looked like such tiny plants. they went in all the way to the first main leaves so they would send out deep roots and not shallow roots that could easily burn in the hots days of Juky and August. We left a bowl-like depression to catch the water. We covered them with modified milk cartons to keep away cutworms, discourage invaders and protect for those first cool nights.

Today’s podcast of The Writer’s Almanac  (which is primarily about writers and literature but often takes little diversions – as many writers do when they should be writing) coincidentally had a segment about tomatoes.

It was on this day in 1893 that the Supreme Court ruled that the tomato was a vegetable, not a fruit. The Tariff Act of 1883 said that a 10 percent tax had to be paid on all imported vegetables. The importers argued that according to the dictionary definition of fruit — the structure that grows from the flower of the plant and holds the seeds — a tomato was a fruit. The government read the definitions of “eggplant,” “squash,” “pepper,” and “cucumber” — all of which, like tomato, are fruits in the botanical sense — but which are considered vegetables.

Justice Gray delivered the opinion of the Court: “Botanically speaking, tomatoes are the fruit of a vine, but in the common language of the people, they are vegetables which are usually served at dinner in, with, or after the soup, fish, or meats, and not, like fruits generally, as dessert.” 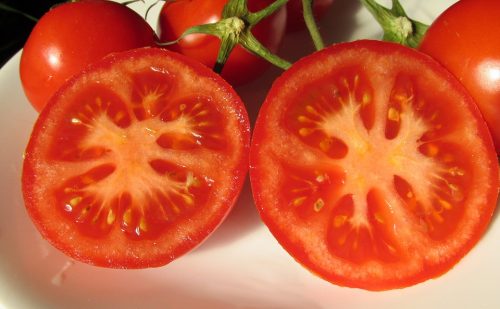 I knew most of that, but it struck me that the real problem was that “vegetable” has no actual scientific or botanical definition. It is a culinary term.

Tomatoes have always been for me a vegetable because that was the way we treated them in our home. But there is one exception to that.  When I am in the garden in summer, weeding, staking, looking for pests and watering, I can’t help but pick a very red and ripe tomato and biting into it in the same way I would eat an apple, peach or plum from the trees in my childhood backyard.  No tomato tastes better than those. And some are “grape cherry tomatoes” their shape and size suggesting that other fruit.

As I am typing this, I can see my seedlings outside in their tray with a net cover. I also see two squirrels running around the yard and a rabbit snooping by the deck wondering about when my plants will be set into the ground. And that reminds me of a poem by a teacher I once had in a summer workshop. here is an excerpt from “Blue with Collapse” by Thomas Lux.

It’s spring, the blooming branches
nearly hide the many dead ones.
A squirrel, digging for a nut, upends my frail
tomato plant and fails
to replant it, even though he has the tools.
I find this kind of squirrely oblivion everywhere.