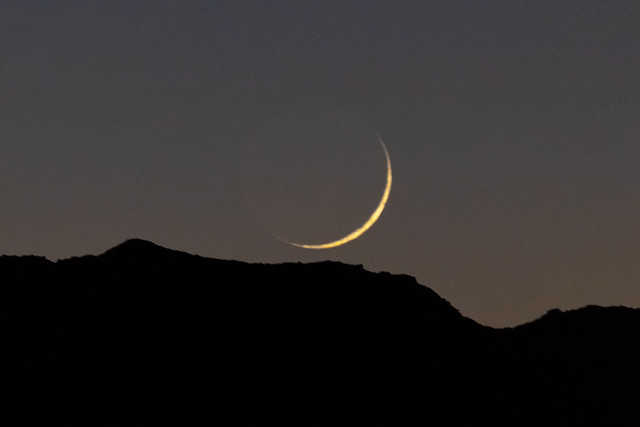 This past Tuesday was the New Moon which looks like no Moon to the unaided eye. This is the first lunar phase when the Moon and Sun have the same ecliptic longitude and the lunar disk is not visible. Actually, this phase is really a very thin first visible crescent of the Moon after conjunction with the Sun. That thin waxing crescent is briefly and faintly visible as the Moon gets lower in the westerly sky after sunset.

An article on Discover magazine’s website asks “What if the Moon disappeared tomorrow?” Before reading it, I would have guessed the effects on Earth would be dramatic, but that’s not exactly the case.

The effects would have been more dramatic three billion years ago when the moon was closer to Earth, but now the Moon is “far enough away that most of the things it does for us are very long term, like stabilizing our orbit over hundreds of thousands of years.”

Most of us wouldn’t notice the Moon was missing that first day. Tides would be reduced, but not completely absent because the Moon and the Sun both have an effect on tides.

At night, animals might be more affected by the absent Moon than people. We would miss seeing it and it would be darker all month – but no darker than it was last Tuesday.

Earth’s motion about its axis would be affected but since it increases the length of a day by about two milliseconds every century, I doubt that anyone will be upset.

Back those billions of years, the Earth had 4-hour rotations. But the Moon gradually slowed us down to 24-hour days. Thank you, Moon. I already feel like 24 hours isn’t enough.

Without the Moon, Earth’s tilt wouldn’t be as steady and so probably the most dramatic effect would be on our seasons and climate.

Don’t worry. The Moon isn’t going away.  Look up tonight at the waxing crescent.

December’s Full Moon rises on the night of Wednesday, December 11 and since for most of us in the north it brings in the winter season, it is often called the boringly obvious Full Cold Moon.