I love a good longitude/latitude challenge. Found this card and look who was standing next to it, totally unafraid and not surprised to see himself on the gift card. Headed to @cedarbeanscoffeejoint to cash in my reward.
Got a ways to go.
Some garden picking. Enough Roma tomatoes to make an order of puttanesca sauce. I’ll skip the capers. Maybe use that candy cane pepper. Lynnette’s not a garlic fan like me.
“In photography there is a reality so subtle that it becomes more real than reality.” - Alfred Stieglitz #photography
“An early morning walk is a blessing for the whole day. “. - Henry David Thoreau, from ‘Walking’
Pollination. #roseofsharon #butterfly #pollinators

I was fascinated by books and movies about the legend of King Arthur as a boy and it has continued into adult life. In college, I took a course on the Arthurian legends and we read Le Morte D’Arthur in its 15th-century Middle English.

Sir Thomas Malory’s prose tales of King Arthur, Guinevere, Lancelot, Merlin, and the Knights of the Round Table were compiled and modified from French and English sources to make a complete story of Arthur’s life. Malory wrote it while in prison.

One thing that Professor Kellogg told us was that Arthur’s story has been reinterpreted many times in the centuries since Malory. Each interpretation and reimagining of the legend reflects the time the new author lived in and Arthur is seen in a different way, reflecting the time of the reinterpretation. Since there was a 19th-century revival of the legend, Malory has been the principal source.

For example, the love triangle of Arthur, Guinevere and Lancelot has been portrayed in ways so that each of them is to blame. Arthur is at fault. Arthur is a fool. Arthur is loyal to his friend and wife.

In 1934, the Winchester Manuscript was discovered and that is an earlier version than Caxton’s. Like Shakespeare and other old texts, there are many different editions that show different spellings and grammar and changes to the plot.

I reread the book recently. It was the first time I had read it since college. I read the new version by Gerald Davis of Le Morte D’Arthur
which draws on both the Caxton and Winchester manuscripts.  But the key elements of the story remain.

This is not a 21st Century “reinterpretation” but it is a version written for modern readers. The love triangle that forms when King Arthur’s wife, Queen Guinevere, has an affair with Sir Lancelot. This double betrayal breaks Arthur’s heart but it also starts a civil war and ultimately leads to the end of King Arthur’s kingdom.

My rereading is now overlaid with the many movies, TV programs and other books I have read since college about Arthur. When I read about young Arthur I see the Disney cartoon Arthur of The Sword in the Stone that I saw in 1963 and also the Arthur in the source book by T.H. White, The Once and Future King,  which is very good and not cartoonish or a children’s book. 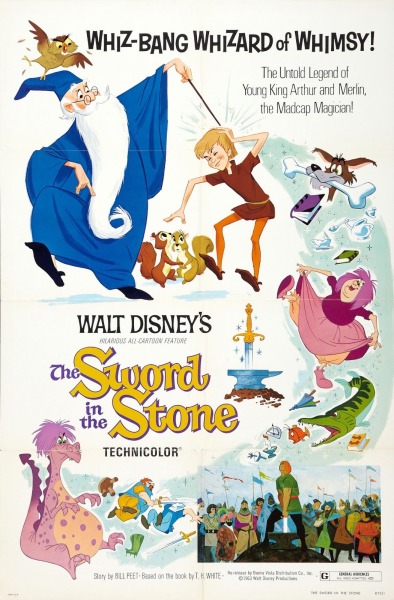 White’s young boy Arthur is tutored by a wizard named Merlyn in preparation for a future he can’t imagine where he will be a king with the greatest knights sworn to chivalrous values, a beautiful queen and he would unite a country as Arthur, King of the Britons.

Arthur is the once and future King because the legend is that he will return when England needs him. Versions of the legend during the period of WWII see him as returning in some form to save England.

Malory writing in mid-15th Century was viewing Arthur saw a change in society that included the end of knighthood. He also would have one of the first books printed in England and reach new readers.

In 1509, Henry VIII, wanted to revive an idealized age of knighthood. He had the Winchester round table of Edward III painted over so that he was on now top as the new Arthur.

During the early 19th Century, Romanticism, Gothic Revival, and medievalism developed, and chivalry was appealing. Alfred Tennyson rewrote the Arthur’s story for the Victorian era in Idylls of the King. His Arthur was the ideal of manhood but he fails because he is human.

My wife brought home The Mists of Avalon in 1982. That novel reimagines the story from a feminist perspective. 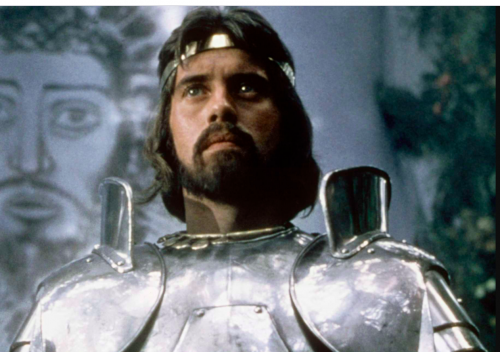 I watched the film Excalibur multiple times with my young sons who loved that Arthur and Merlin. The love triangle kind of passed over them. The film, directed by John Boorman, takes a mythological and allegorical approach to the story.  Arthur is the Wounded King who can only be healed (along with his kingdom) by the Holy Grail. It is the cycle of birth, life, decay, and restoration.

There is some of that in the 1991 film, The Fisher King, starring Jeff Bridges and Robin Williams. (It is one of my favorite Robin Williams’ performances.)

The Wounded King’s realm becomes a wasteland as does the Fisher (or Sinner) King. It is not Arthur or Lancelot who find the Grail, because both of them are flawed and unworthy. They are healed by Perceval.

John Boorman remarked that the Christian symbolism of the Grail is what “my story is about: the coming of Christian man and the disappearance of the old religions which are represented by Merlin. The forces of superstition and magic are swallowed up into the unconscious.”

In retelling the legend of Arthur, writers have acted like Malory and included elements from other stories. Boorman has the sword Excalibur between the sleeping Queen and Lancelet which comes from the tales of Tristan and Iseult. Perceval not only gets the Grail to Arthur but also returns Excalibur to the Lady in the Lake (rather than Bedivere as in Malory) and the characters of Morgause and Morgan Le Fay are made one character.

How would a 21st Century view of King Arthur be viewed? Would it address democracy, manipulation of the story presented to the public, deception, healing, loyalty…? What other stories might be mixed in with the Arthurian legends?